DORIS MANINGER | they are here [an army of nude bitches] 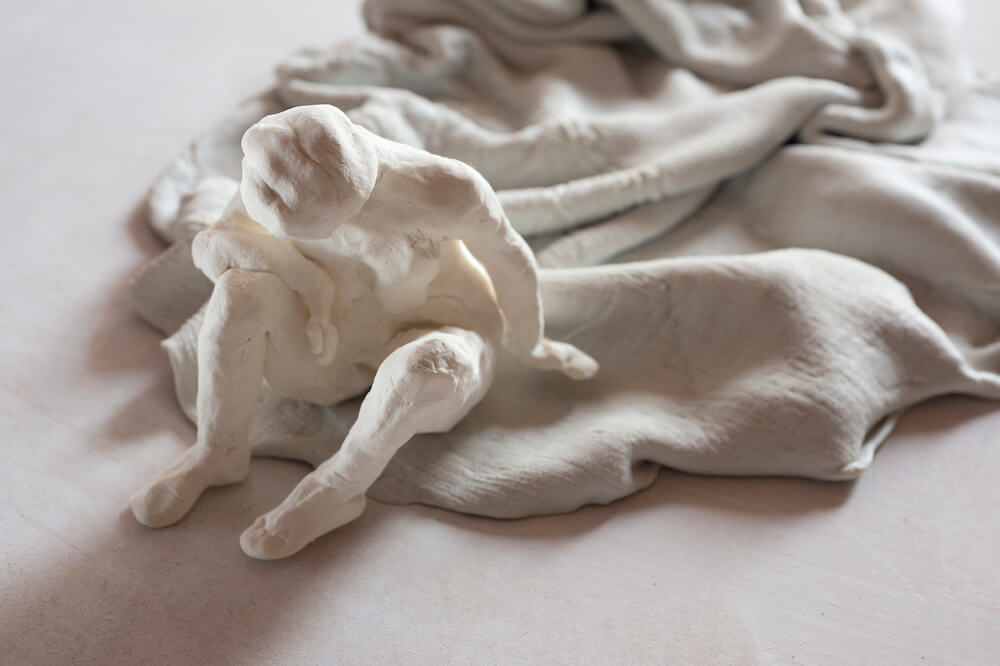 The artistic act is always a moral action, even when a painter reduces color to its purest form, just as when a shadow is placed in its stead.

Far and almost obsolete echo the words of Luciano Fabro, attributing ethical value to the making of art insofar as it is understood as a synthesis of obsession and talent, as an inescapable drive that defies all opportunistic logic and considerations related to the desire for fame and success. These words however, still ring true as the answer to a pressing need: re-acting to the values and rhythms of consumerist society by turning to poetry as poiesis, as the act of creating, composing, transforming and manually (and maybe magically) intervening in the world. It is in this light that the act of making art of Doris Maninger should be read.

Life is a daily affair…

This is what, with supreme awareness, Tolstoy/Pierre enunciates towards the end of “War and Peace”, having discovered that it is the minutest details of events that truly respond to (and shed light on) the deepest and most complex (not to mention conflicting) forces at work in life as well as in the human soul. It could also be read as a wonderful and programmatic statement on the role of artists. Artists as heroes, perhaps, that sort of heroism that lies in the way one organizes his/her work as a method of survival and as a gesture of defiance to our accelerated times gone mad, without loss of dignity nor sense. Artists who play with transgressing disciplinary boundaries within a discipline they deeply know, blowing up the institutionalized codes of transgression themselves. If this definition could give a sense of the work of an entire category of artists, spanning virtually the entirety of modernity, it is without doubt to this category that we would ascribe the work of Doris Maninger.

The works on display

They are here [an army of nude bitches] is the title of this exhibition and the name of a small universe made of a hundred women, just as many fabrics and approximately 2.500 ceramic babies, all of them created during a residency of a little over three months at the European Ceramic Work Centre in ‘s-Hertogenbosch (Netherlands) in 2013.
There, the artist realized a woman a day (and a drawing too) as a form of self-imposed discipline and as daily ritual. The women appear as ‘three dimensional sketches’ because of their lightness and out-rightness. Every figure is crouching, leaning, hiding between the folds of moulded ceramic fabrics that appear to lay there as if by chance.

The material has been thoroughly worked with a no waste approach, therefore a child (male) has been shaped out of every scrap, and becoming a component of a sort of parallel army. Women and babies present themselves as two groups, alike and opposed at the same time, somehow debating between each other.
Even though they are anonymous figures, the women maintain their own specificity and uniqueness as they portray private and solitary moments, representations emerging from memory and more precisely from bodily memory, which is at the same time physical and internal.

Conversely the children, even though they have individual shapes and gestures, present themselves and manifest their identity primarily as a compact formation, homologous and united by a yet-not-defined character but at the same time infused with positive power and the natural energy of an army about to move its first steps.

A wall installation of new drawings, connected by a red line, completes the overall picture as a paradoxical post-production (the drawings evoke the sculptures, an inversion of the canonical process).

The book They are here [an army of nude bitches] comprises a selection of drawings created during the Dutch residency. A continuous narrative of sort, the drawings are a series of interconnected real-life episodes and references to mnemonic imagery. Sometimes they are accompanied by intimate notes linked to the creative moment and apparently disconnected from the images themselves, perhaps a conscious representation of the way memory is nothing more than an endless series of reconstructions that the present makes of the past. Ironic and macabre at the same time, the drawings reveal the emotional charge and the penchant for provocation embedded in the entire work.

The book, the very first ‘Artist book’ by Doris Maninger, contains a reflection on the drawings of writer Michele Mari, a critical analysis of art historian Riccardo Lami, a ‘linguistic drawing’ of writer and curator Sarah Rifky, a conversation between the artist and her daughter, curator Antonia Alampi and a conclusion by Stefania Miscetti. The book is published by Nero Publishing.

Doris Maninger (Graz, 1958) lives and manages, teaches, draws, models, sews and creates jewelry mainly in Florence.
Before she started co-directing Alchimia (an important school of experimental jewelry, www.alchimia.it) she studied painting and history of art at the Vienna Academy of Fine Arts; subsequently she moved to Italy and started working, still very young, as restorer of frescoes, wooden sculptures and gilding for the Italian Ministry of Cultural Heritage and Activities in Cosenza, Calabria.

From restoration work, she later moved on to experimentation with different materials in the fields of painting, sculpture and textile design, combining traditional techniques with contemporary conceptual developments.

In 1998, after completing her studies in jewelry, she moved to Florence and founded Alchimia, together with Lucia Massei.
Since then she has exhibited, curated exhibitions, delivered lectures and held workshops in places such as Hong Kong, Seoul, Tokyo, Tel Aviv, Bangkok, Asswan, as well as in private and public institutions in both Europe and the United States. This is her first solo show in Italy.

here below some images from DORIS MANINGER’s they are here [an army of nude bitches]. 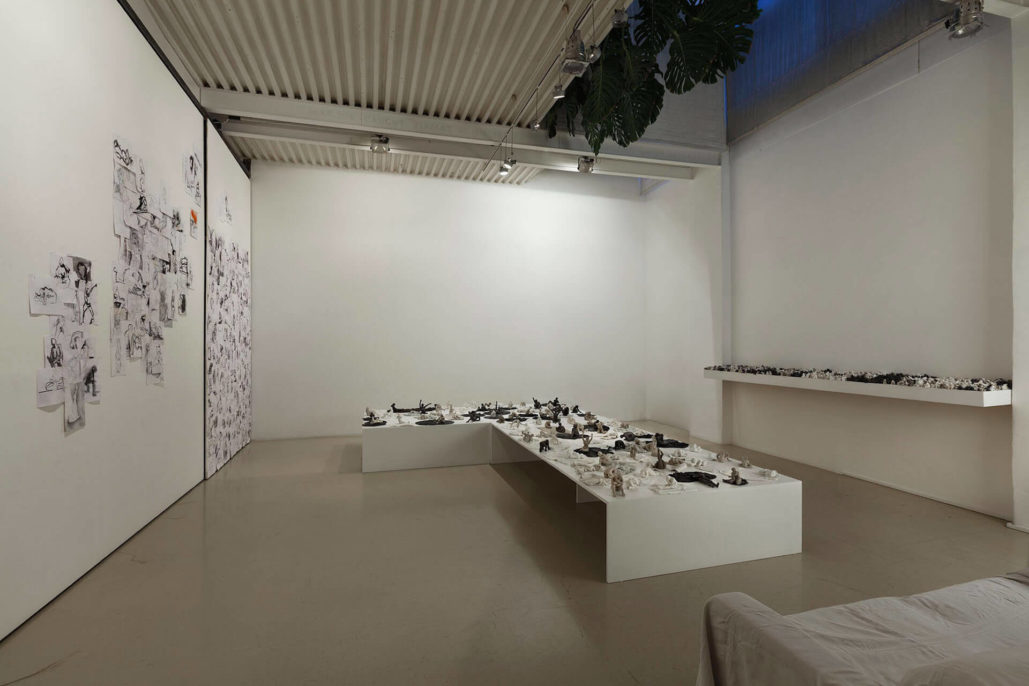 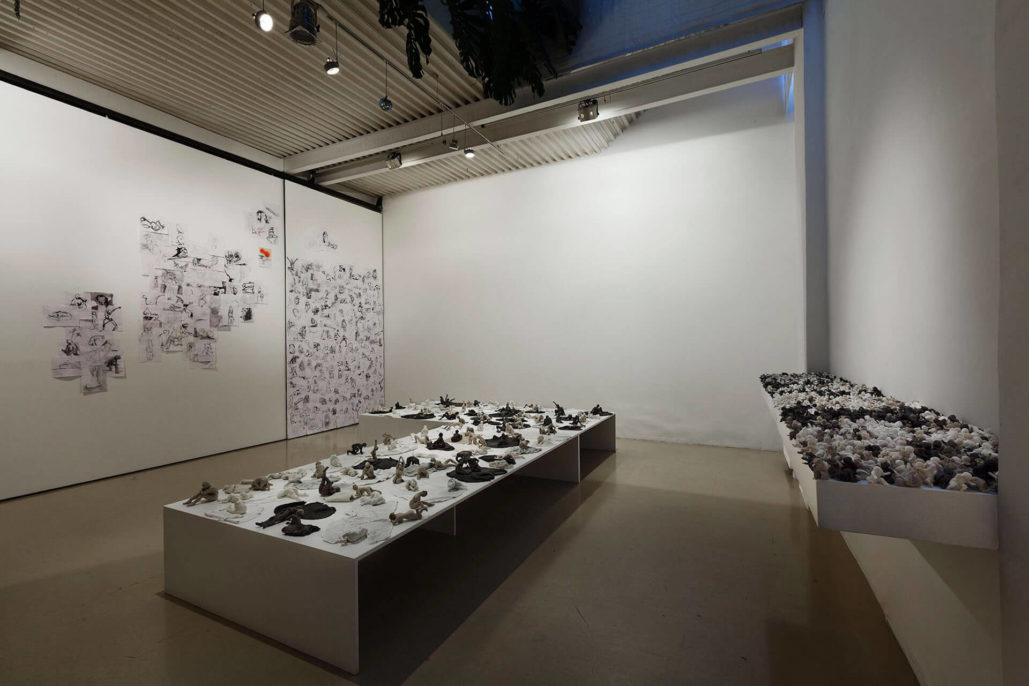 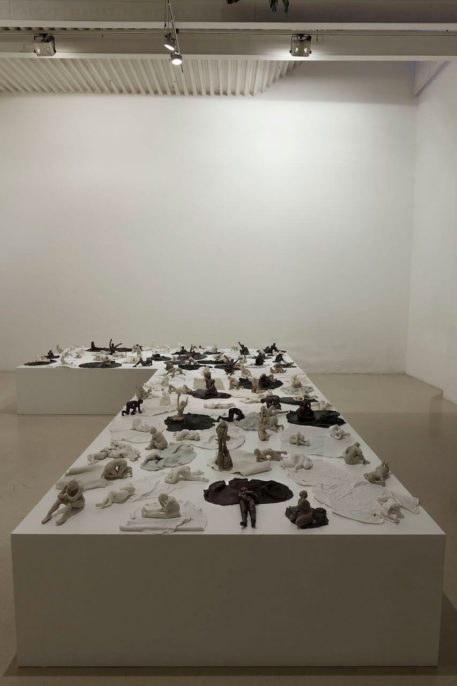 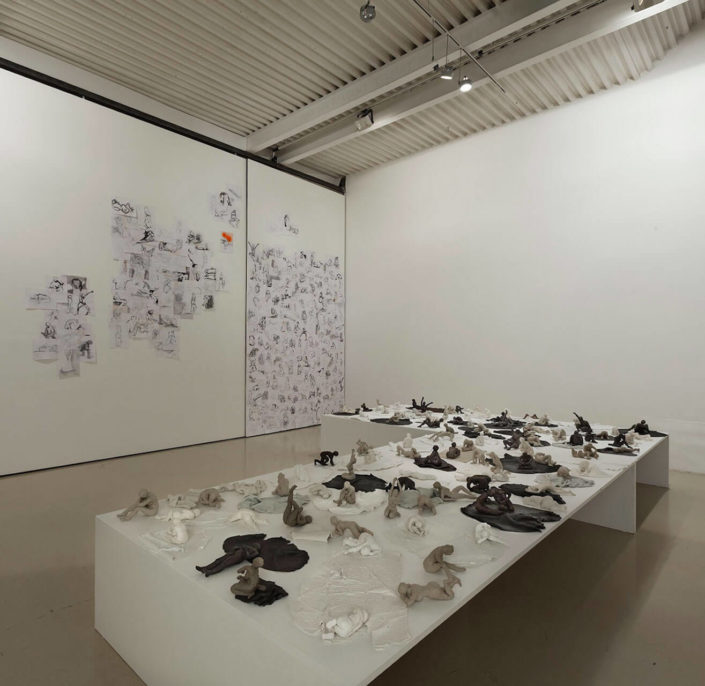 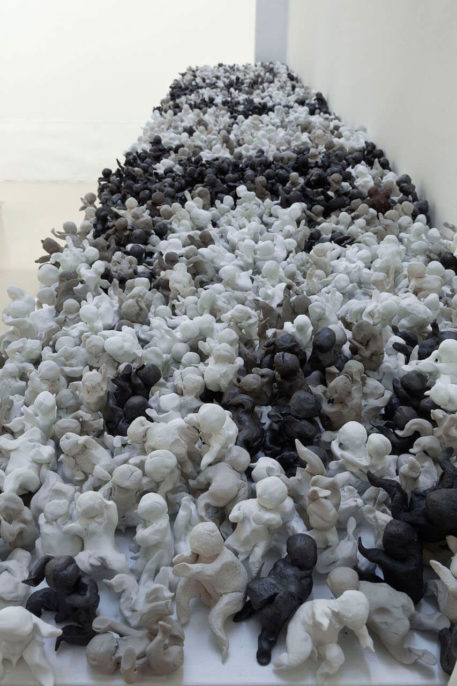 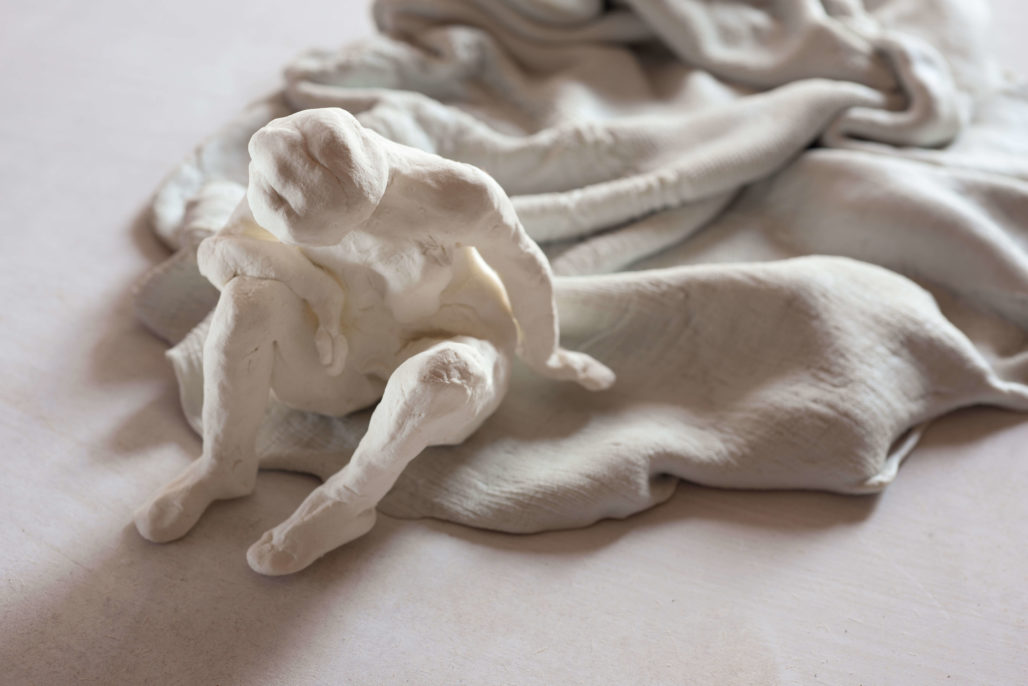 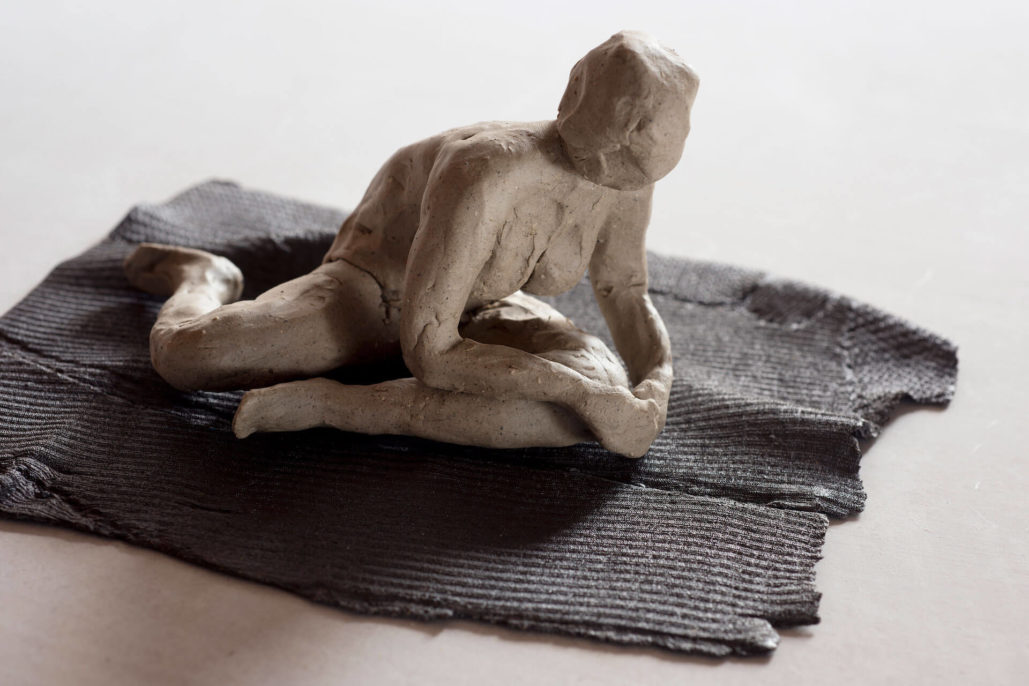 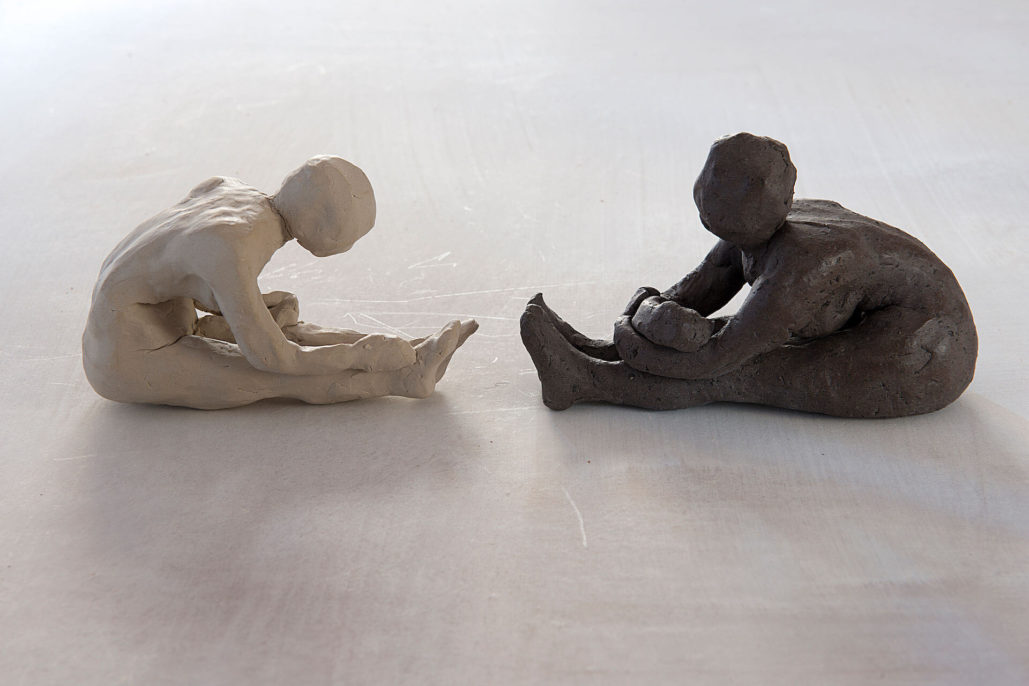 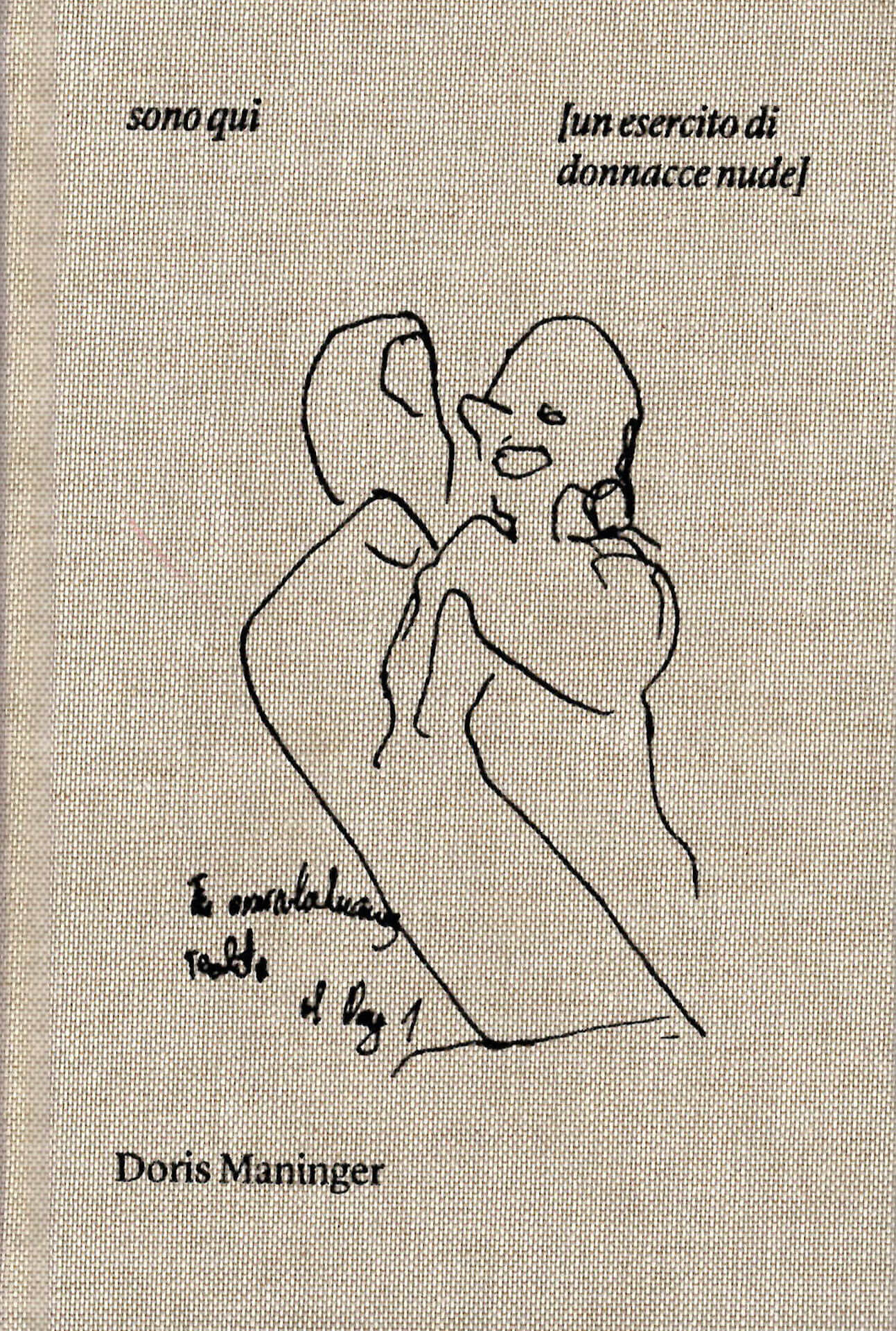 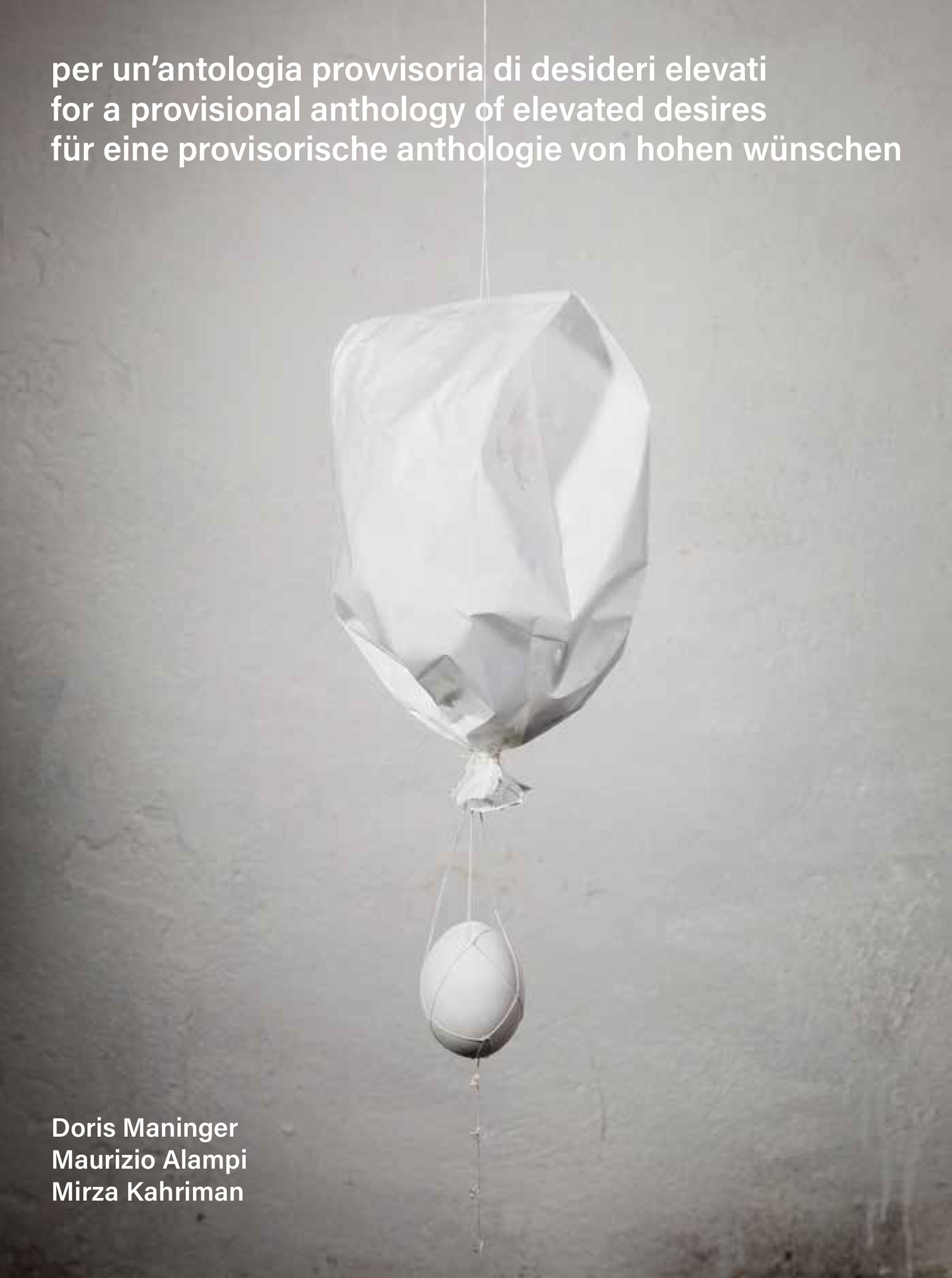 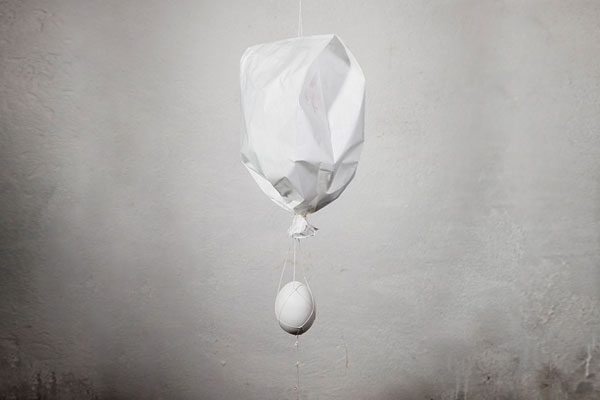 for a provisional anthology of elevated desires