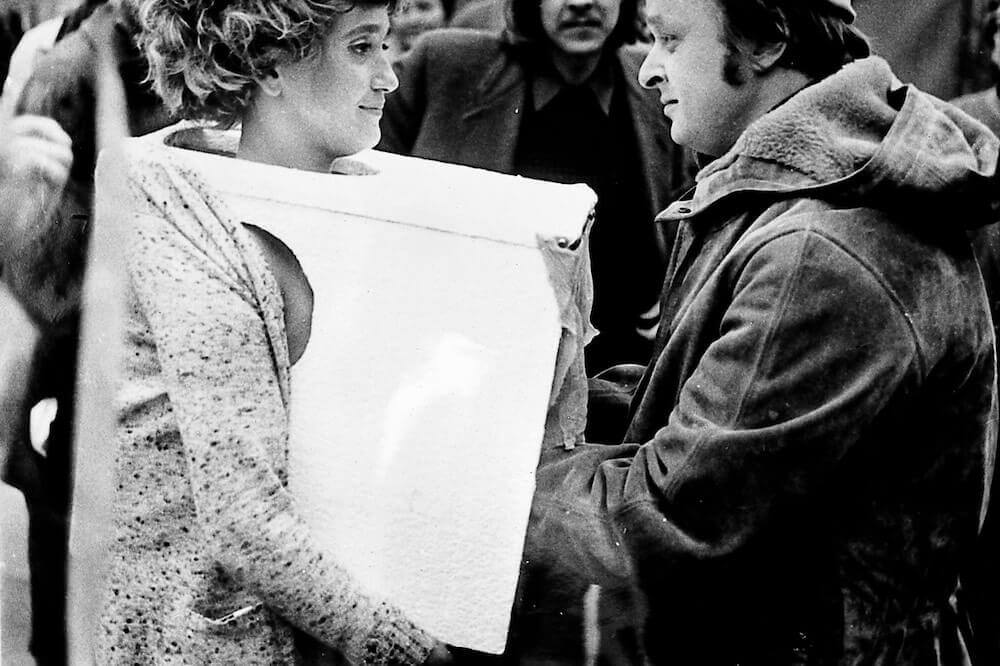 STUDIO STEFANIA MISCETTI presents, for the first time in Rome, a personal exhibition of historical and recent works, the Austrian artist VALIE EXPORT. A feminine protagonist of the international artistic scene, belonging to the generation of the post-war avant-garde. With her wide, powerful and at the same time aggressive and aesthetically refined work, EXPORT readies the world for the next artists generation by continually challenging limits and certainties with the use of advanced technology, as in her performance at the 2007 Venice Biennale. Her body of work is composed of performances, documentaries, photos, computer works, laser installations, drawings, objects, sculptures, an expanded cinema theorization of an experimental video series spanning from 1960 until today and since 1973, also contemporary art publications and essays.

Film Abstract No. 1 of 1968 is the first official work in which simple objects such as water, colours and mirrors alluded to the complex world of special effects technology, simply pouring water and liquids colours on a mirror and projecting them on a screen. For the artist this live projection was the reality, as opposed to images on celluloid mediated by a movie camera. She began to call many of her works Anti-Art or No-Art: Her art becomes more and more a political instrument to react against society and the Establishment, as she declares: “For me Expanded Cinema is also a strong rejection of the copyright concept. This is my idea, my thought, but it can be developed anywhere from each of us: everyone can make an Abstract Film. No. 1”.

In the same period with video Cutting 1967-1968, the artist reflects on the importance of the cut technique in cinema. In opening, the first part, a window projected onto a paper screen is opened through incisions made into the screen. The performance ends with an explicit homage to Marshall McLuhan in the cut-out of his famous phrase “the content of writing is speech”.

Sehtext: Fingergedicht, Visual text: finger poem, 1968 – 1973 is a short videotape showing a frontal view of Valie Export’s semi-figure as she forms various signs by hand and lines. It is sign language using only the fingers and hands, a poem without words or movement of the lips. At the end, the following German text appears, which – freely adapting the philosopher Martin Heidegger: “Ich sage die zeige mit den Zeichen der Sage frei nach Heidegger – I say the showing with the signs of the legend -”.

Hauchtext:liebegedicht, Breath text:love poem, of 1973 It is also a short videotape in which the artist continues her reflection on the use of language. Again she is the protagonist and with her breath writes a few symbolic sentences on a glass.

On Remote … Remote of 1973 the artist declares: “Human behaviour – in contrast to that of machines (animals) – is influenced by past events, no matter how long ago they occurred. This has led to the existence of a spiritual para-time that runs parallel to objective time and is constantly subject to the influence of the prayers of fear and guilt, of the incapability to overcome, of deformations that tear open the skin, of visual manifestations. I point to something representing past and present”. Sitting back of a photo showing two children who were sexually abused by their parents, she tortuously cuts into her cuticles until blood drips into a bowl of milk on her lap. On top of the symbolic plane of blood and milk, the physical effect on the viewer of her destructive act of self-mutilation is extreme.

In the performance Hyperbulie of 1973 the artist steps inside and moves through a corridor of electrically charged wires. Accepting the challenge with the pain pressed her head against the wires again and again. Society is a closed, structured space, which regulates all human energy through painful barriers. The space delimited by cables represent the society’s barriers with we daily enter in contact undergoing a forced normalization of our actions. Only through an effort of will to overcome the pain we can able to achieve a state of free expression.

In Asemie of 1973, the artist appears naked, crouched on a table, tying with a thin rope a bird on the table. Then starts to pour some hot wax on it and on her body. Before on her right foot and on her left hand than overturning the wax pot, covers her left hands too. After creating a state of immobility with the wax, begins to rid herself removing the wax with a palette-knife held with the mouth.

In Raumsehen und Raumhören, seeing and hearing space, of 1974 two video cameras and a mixer make possible a closed-circuit action that demonstrates not only the differences in the way the viewers perceive a person who is physically present in the room and simultaneously electronically reproduced, but also how the image is manipulated by its electronic conveyance. The camera zooms in and out, subjecting the performer’s monitor likeness to permanent alteration. Specific synthetic sounds are linked to the picture.

The analysis on communication between the sexes continues in Body politics always of 1974. The politics of behavior between men and women can be demonstrated in the movements of a body. A man and a woman connected by a rope rises and falls on two different escalators. The escalator with one moving up and one moving down shows the difficulties of a dialog.

Since 1970 1973 achieves one of the first films Mann & Frau & Animal, man and woman and animal, the film begins with a catalogue of shots detailing a bathtub’s various appliances. From here we cut, quite startlingly, to a woman in masturbating in the same bathtub, using water from one of the previously seen faucets. We never once see that woman’s face, and her breasts are covered by her bra, her vagina and clitoris are rendered in stark close-up. The image is more gynaecological than it is pornographic becomes a statement of femininity from a female perspective completely independent of the values and pleasures that identify a woman as an object for male pleasure. On the same concept we can consider the video work Orgasmus of 1967.

In the film, Syntagma 1984 for the first time VALIE EXPORT is not the protagonist. Her body, a symbol of her research, is replaced with that of an actress. Her body becoming also an icon for the media communication, EXPORT with this gesture underlines the importance of the ideology against the pure aesthetic recognisability.

The film Ein perfektes paar oder Die Unzucht wechselt ihre Haut, a perfect couple or luxury change your skin, of 1986 ends the serie. The television boom of the eighties was the spread of music video on television. All over the world the music comes to the public not only by radio but instead with pictures. The EXPORT with her research on technological advances related telecommunications, realizes this colour film in 16 mm as a music video on sex and its commercialization. An ironic body-builder uses his body as a billboard, the man trying to persuade a woman to do the same with her body.

here below are some images from VALIE EXPORT’s exhibition. 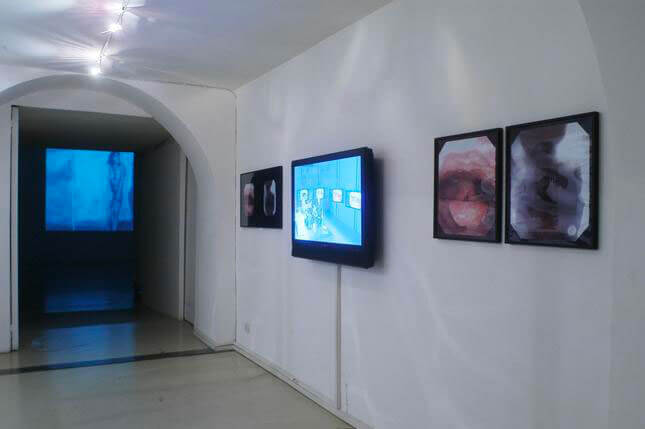 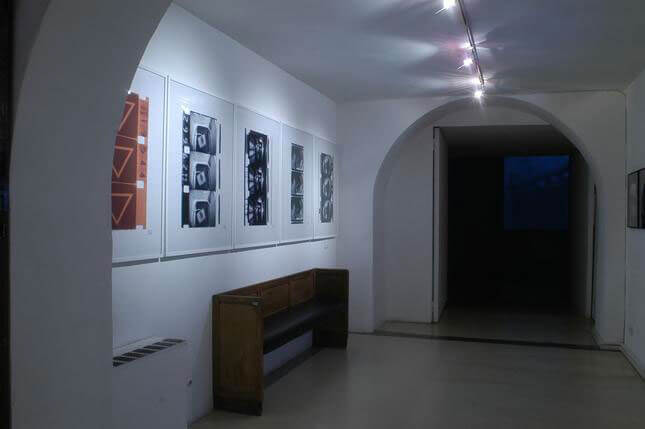 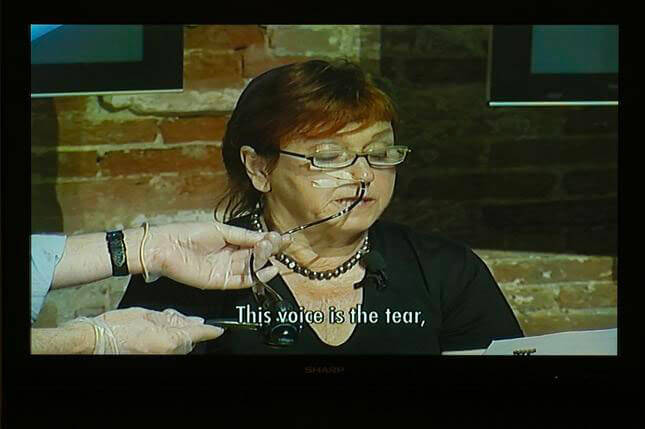 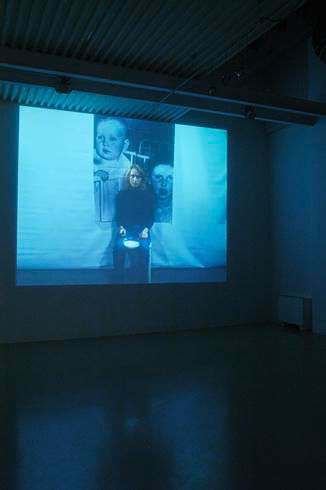 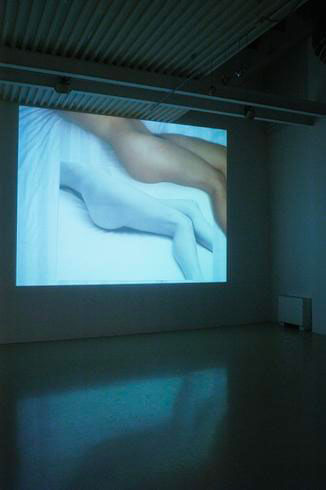