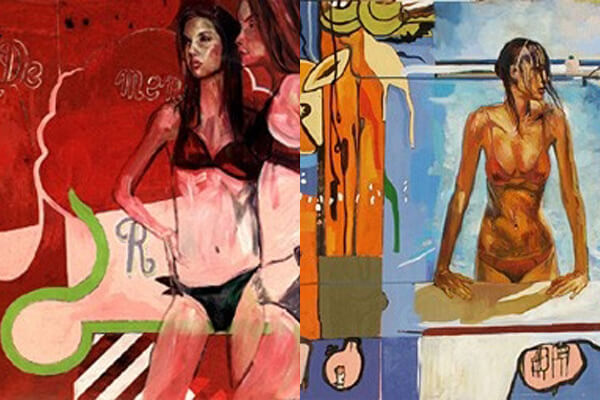 “Dougal Graham, Heinrich Nicolaus and Sawan Yahghwe, three artists from North America (Canada), Europe (Germany) and Asia (Burma) respectively, decided that it was time to put an end to the romantic idea of the artist as a lonely, heroic figure holed up in their studio. They came together to do so in a decidedly unconventional location: a large space in the Chianti hills, out of which they have worked since 1999 under the DORMICE® label. Following a year of endless summits, they began to produce an enormous volume of work in which the individual ego is shattered, then blended into large-scale canvases, thus creating singular visions of the contemporary that have a powerful emotional and intellectual impact. The painting is the work of several pairs of hands and testifies to a skilled craftsmanship that mirrors the collective experience behind the work’s conception, development and realization. The artists are inspired by major figures in the worlds of art, music, sport, fashion and cinema, who meet on their canvases in order to offer us the images of a new, contemporary mythology.”

“One of the interesting aspects of the Dormice’s work is their justification, in the document introducing their work, of the constant presence of female figures; every painting seems to be constructed like a stage set, a background accompanying a female personality. In almost all cases they are beautiful women drawn from the society of spectacle’s ‘prima donna’ culture. The Dormice have ripped the conscious emphatuations of consumer culture from the covers of illustrated magazines, irrespective of whether they are erotically invasive or mere currency. Dormice’s sirens are not rosy-cheeked girls caught in a spell that can only be exorcised through the restorative salvation of painting: they are the paint itself, walking through the frame; they are angelic and inflexible forces, arcane guides over peaks and troughs, through tortuous passages and destinations, to conflict; they wear the clothes of everyday mediatisation. Just as the painting goes beyond technique, these sirens go beyond women, and the background to this climax is a “bittersweet landscape”.

here below are some images from DORMICE’s let’s be serious. 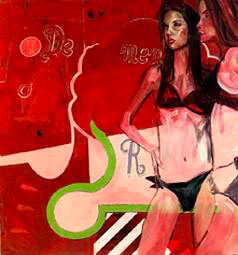 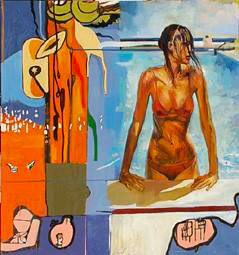 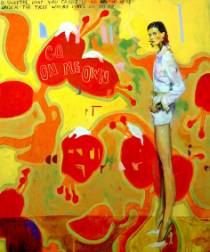 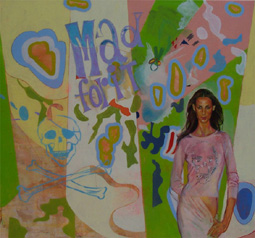